Moke Round Up Tamworth

2022 Moke Round Up Tamworth 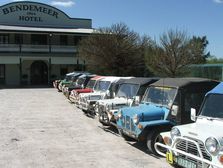 WEDNESDAY - Destination is Bendemeer. The route is from Moke Central to Moonbi via back (sealed) roads and then halfway up the Moonbi Ranges via the highway to stop at the lookout for morning tea. Whilst at the lookout, there will be the opportunity for smaller groups to head to look at the illusion known as Gravity Hill, which is close to the Lookout. Then it’s north to Bendemeer, where we will have lunch. There is the choice of the Bendemeer Hotel or the Pioneer General Store. The hotel is family friendly and they have a huge area running down to the Macdonald River where the kids can run off some excess energy if the weather is good, or for the older folk to stroll around and stretch their legs. There is also the Bendemeer Pioneer General Store for those who just want a great coffee, sandwich or burger. There is a large garden area at the store to have lunch, coffee, etc.
After a lazy hour or two for lunch, we head west to Attunga via the spectacular Bungendore Spur (unsealed). From Attunga it is an easy 25km down the sealed Manilla Road. The plan is to be back at Moke Central in plenty of time for the sausage sizzle that is provided by the owners of Austin (aka Moke Central).

It is what it sounds like - an Aussie sausage sizzle. So pieces of bread with sausages, onion and tomato sauce, although some of the Mokettes usually bring along a bit of salad. Nothing too flash, but has proven very popular in the past and a good ice breaker to get everyone together. Usually kicks off about 6.30, but we will confirm the time closer to the event. 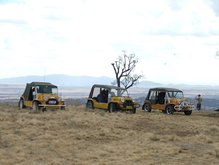 THURSDAY – It’s a Manilla day, to Manilla via Somerton Road, morning tea near the bridge on Somerton Road. Supplied lunch at Manilla Weir on the Namoi River. After lunch, trip to Mt Borah which is the venue for the International Paragliding Championships as well as other regular competitions and recreation. Manilla back to Tamworth is an easy sealed run. There’s an optional run at sunset up to the Oxley Lookout, a few kilometres away. 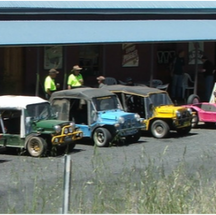 FRIDAY - Destination is Walcha Road. The plan for today’s run is up the highway to a spot on a creek near Bendemeer for morning tea. After that we’ll have a very scenic run east along unsealed roads on the top of the range to the little village of Woolbrook and on to the Walcha Road Hotel for lunch.

After lunch, we’ll head down the Moonbi Range on Danglemah Road, following the Main Northern Train Line (unsealed) to Limbri, and on to Moke Central via the bitumen. 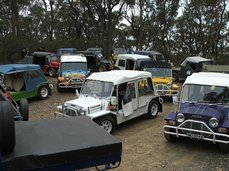 SATURDAY – Nundle! The all sealed route there is O'Briens Lane/Loomberah Road to Dungowan. Continuing on, it’s a short drive to Woolomin Park for morning tea, and then via Nundle Road to Hanging Rock Cemetery. We'll visit Hanging Rock lookout in two shifts (note the 1km access road to lookout is unsealed) and then lunch down in Nundle.

There are several choices here ranging from BYO in the local park with kids playground, to a take away shop, a coffee shop style cafe that does lunches, or the historic c1860 pub which offers an inside dining room, beer garden out the back or you can sit at a table on the wide front veranda.

Nundle is an old gold mining town. It's quite a small tourist driven town these days, which offers a couple of popular antique shops, a replica gold mine experience, and an historic Woollen Mill which has proven very popular with the crafty ladies in the past.

We will give everyone a few hours to go and do their own thing before running the group back home to Moke Central, via your choice of the bitumen only or a short unsealed stretch via Bowling Alley Point. 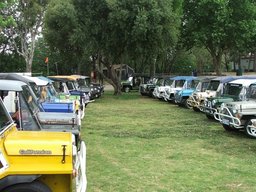 From the lookout we will drive to South Tamworth and the Golden Guitar. Here there are multiple options for lunch, including the Longyard Hotel, KFC, Subway, McDonalds.


For those that are able to stay an extra night and make a fresh start home Monday morning, you have at least three options for Sunday afternoon :

Don't forget to also read the  "What to expect at the Moke Round Up" thread on the Moke Forum for a more general overview of what the event is all about.

© Moke Round Up. All Rights Reserved.